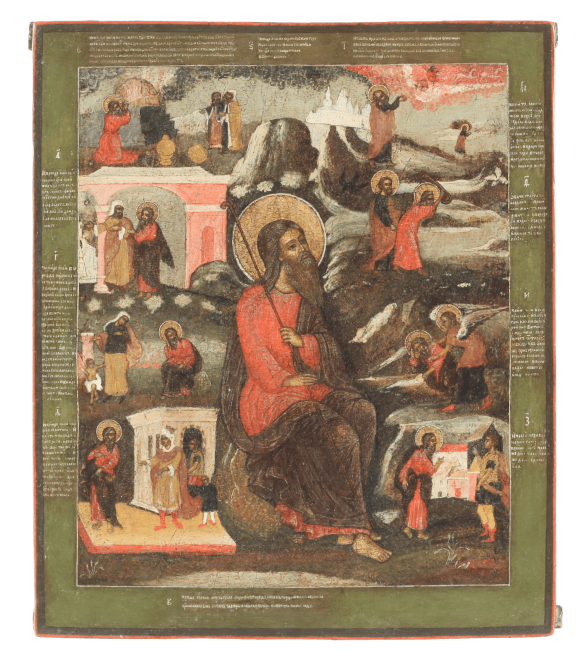 A rare narrative icon of the Prophet Elijah, with scenes depicting miracles and other significant events from his life.

Icons of the prophet Elijah often emphasize his desert life, which is reflected in his appearance. He is depicted as a desert dweller, wearing a camel-hair cloak and a long, somewhat wild grey beard. What is special about this icon, painted in Kostroma (northeast of Moscow), is that the events from Elijah’s life are depicted in a different way from the traditional vita icons. The different shades of green and the contrasting red and the extensive text on the edge of the icon are characteristic of Kostroma’s icons.
In the center of the icon is Elijah, by the stream Kerith. A raven brings him food, bread and meat. At some point the brook dries up and God sends Elijah to the widow of Zarephat (one of scenes on the left of the icon). This widow’s son becomes very ill, but is recovered through the intercession of Elijah. Then he battles Queen Jezebel’s priests. Elijah wins, his sacrifice burns by itself. Elijah flees from Queen Jezebel (bottom right). Elijah runs into the desert for a day and doesn’t like it anymore, but he is saved by an angel. It is striking about these and other icons of Elijah that the emphasis is not on great achievements and heroic deeds, but that the saint is shown in times of difficulty.
The icon is described in a small movie (in Dutch): https://youtu.be/dfWIdmyVFTk