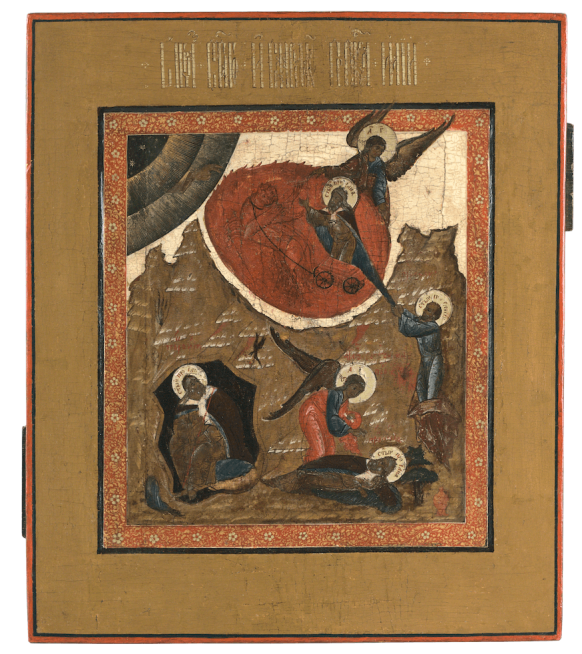 A 17th Century vrezka of the Fiery Ascencion of the Prophet Elijah.

The iconography of the Fiery Ascencion of the Prophet Elijah is based on the Bible books of 1 Kings and 2 Kings and usually depicts not only the miraculous end of his existence on earth, but also two or more significant events that preceded this. In the lower left corner, the prophet is hiding in the Kerith Ravine, east of the Jordan, after having told the Ahab, king of Israel, that God would let it dew nor rain for the next few years because Ahab did more evil than all kings before him. While Elijah is hiding in the cave, ravens, directed by God, bring him bread and meat. The scene in the lower right corner shows the prophet on another occasion, on the run from Ahab and his wife Jezebel. Elijah is lying under a broom bush, praying to God that he might die, since he considers himself to be no better than his ancestors. An angel touches him and provides him with food and drink.
In the upper part, God takes Elijah to heaven in a chariot of fire and horses of fire. Elijah leaves his cloak behind for Elisha, his apprentice.