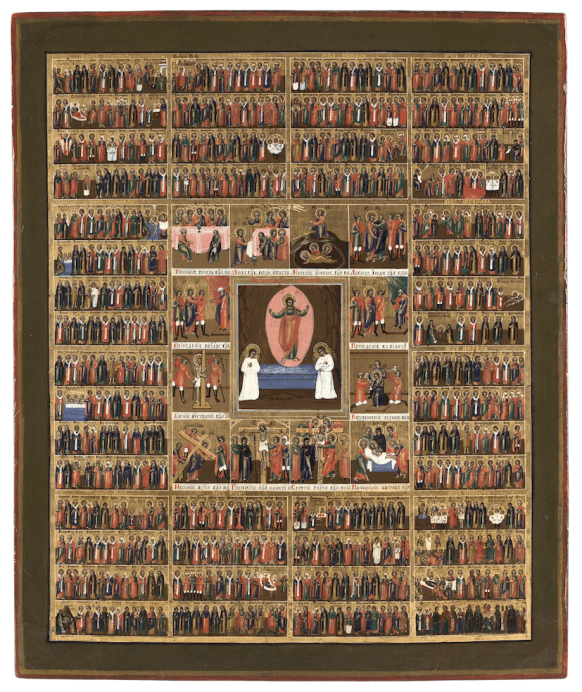 A very finely painted calendar icon representing the entire year according to its saint’s days and liturgical feasts, and twelve scenes from the Passion of Christ encircling a central representation of the Resurrection.

This strikingly well-preserved calendar icon or menology represents the most important saints and religious feasts of each day of the year. Each month consists of a bordered rectangle with four rows in which saints and holy events (the liturgical feasts) are depicted side by side. Each day of the month is indicated by a number (in Church Slavonic by means of letters) that is coloured red in the top part of each row. The indication of each day is followed by a description of the saint or the relevant feast (in black letters).
In accordance with the ancient Byzantine Orthodox convention, this year icon begins with the month September, on the left side of the top row.
Compared to most year icons, which were produced almost without exception for churches, this example is of very modest size. Despite this reduction of size, the figures are still painted with enormous attention to detail that allows recognition of each saint by his or her characteristic facial features and clothing. In this respect, each day on this calendar can be regarded as an individual icon.
Easter, the most important feast day of the ecclesiastical year, does not have a fixed date, but is celebrated on a Sunday (the day of the Resurrection) in the spring, that is predetermined each year, based on the lunar cycle. For this reason, the iconography of the Resurrection of Christ is positioned not in one of the months, but at the heart of this icon. Around this, twelve scenes depict significant moments from the Passion of Christ, starting with Last Supper and the Washing of the Feet and ending with the Descent from the Cross and the Entombment.

Each canonized saint has his own feast day on the liturgical calendar. The choice of this day is often prompted by the day of the saint’s death, the day on which the saint was allowed to enter heaven, but this is by no means a fixed rule. For example, when canonizing the holiday, the date of the birth, a certain miracle, the finding of the relics, the transferring of the relics to grave or the glorification of a saint can also be decisive. There may be practical reasons why a saint’s feast day should not coincide with the day of death. When this coincides with one of the important liturgical feasts, such as the Baptism of Christ or the Dormition of the Mother of God, the feast is postponed for one or more days. There are also some saints who are commemorated in more than one day. John the Forerunner (the Baptist) is a somewhat ‘extreme’ example of this practice: John’s Birth is celebrated on June 24 and his Beheading on August 29. In addition, the Orthodox Church has feasts for the Conception of John the Forerunner (September 23), the First and Second (February 24) finding of the head of John, the Third finding (May 25) and the Synaxis of John the Forerunner ( January 7).