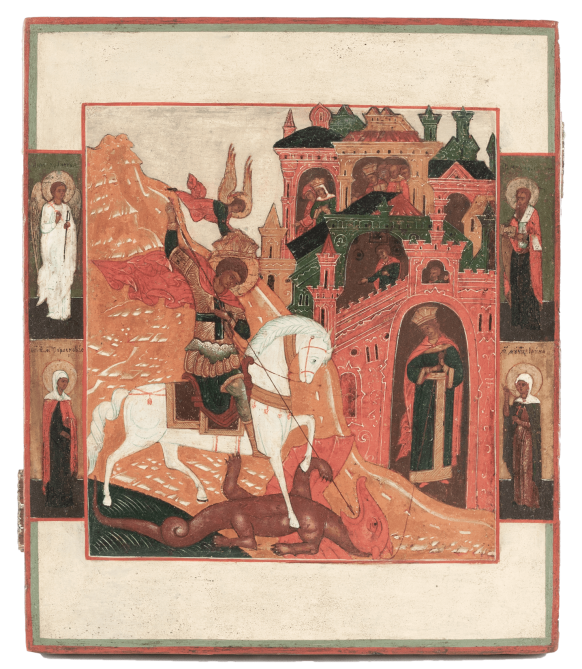 This icon shows the famous story of Saint George and the dragon. The saint is depicted as he pierces the dragon with his lance. An angel holds a crown over Joris’s head. On the right is the daughter of the city lord, holding the dragon on a leash. The architecture of the city has been extensively depicted, with different shapes and colors. The monarch and his wife, along with many inhabitants of the city, see the events from the different windows in the houses.

The soldier saint George, Georgij in Slavic and Georgios in Greek, is a great martyr who is very popular in both the East and the West. In the East he is even one of the most depicted saints. His cult originated in the Byzantine Empire in the fourth century. In the thirteenth century, after the Crusades, he also became a popular saint in the West. George’s feast is celebrated on April 23, his death anniversary.

No historical data about the person of George is known, only from the 11th century does the saint and the legend of the dragon appear in texts. In the oldest sources it is located in Cappadocia. He is said to have been born there in the third as a child of very religious parents. When he was a child, his father was murdered because of his faith. Joris and his mother then moved to Palestine. In adulthood, George became a commander in the elite troops of the Roman emperor Diocletian (284-305). Joris refused to cooperate in the persecution of the emperor and spoke openly against the senate. He was therefore sentenced to death. However, through all kinds of miracles, he survived many torture and murder attempts. As a result, the population and even some of its executioners converted to Christianity. According to legend, George was finally beheaded on April 23 in the year 303.