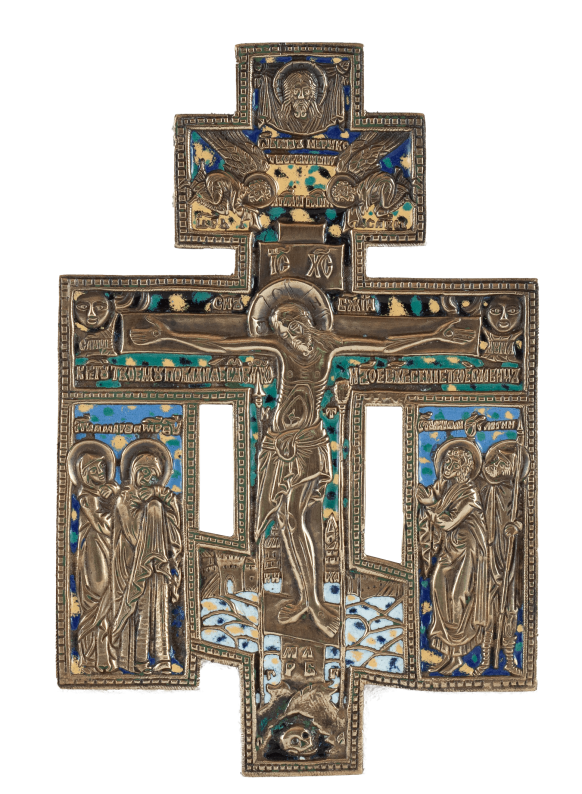 A beautifully decorated cast metal cross, showing the ‘Crucifixion and the Mourners’, two angels and the Holy Vernicle. The pattern of small, brightly coloured dots with a contrasting background shows exceptional mastering of the basse-taille enamelling technique – even for Russian standards.

The cross is probably the most important and recognizable symbol of the Christian faith, crosses are present in the life of a Russian Orthodox believer all year round. While crosses were certainly carved and painted from wood, most of crosses are casted from metal crosses in the foundries of the Old Believers, an offshoot of the Russian Orthodox Church. The shape of the Russian Orthodox cross differs from what we are used to in the Western world. It is characterized by three cross beams. Above the longer crossbar on which the arms of Christ hang, is the sign that, according to the Gospel of John, was placed by Pontius Pilate. This sign has the inscription ICXC. The bottom bar is a support for the feet, it runs at an angle. Various explanations have been given, most common is that one side points to heaven and the other to hell, as the balance of the Last Judgment. On the middle bar, under the outstretched arms of Christ, is a long line of text. It renders the hymnal verses from the liturgy of the Eastern Orthodox Church: “We worship your Holy Cross, O Master; and Your holy Resurrection we praise. ” To the left and right of Christ are the passion tools, the lance (K) and the hyssop stalk (T).
As a kind of background setting for the event surrounding the crucifixion, which after all took place close to the city of Jerusalem, an architectural motif covers the entire outside of the lower crossbar. At the footstool, four letters can be seen, which are an abbreviation of “The Place of the Skull Becomes Paradise”. This icon shows also the witnesses of the crucifixion. On the left the Mother of God and another woman named Mary and on the right the disciple John and the soldier Longinus. Longinus has a short beard and Roman armor. His head is covered with a white cloth. Usually, the centurion holds a spear in his left hand, raising his right hand to underline his testimony about Christ (“he really was God’s son,” Matt. 27:54).