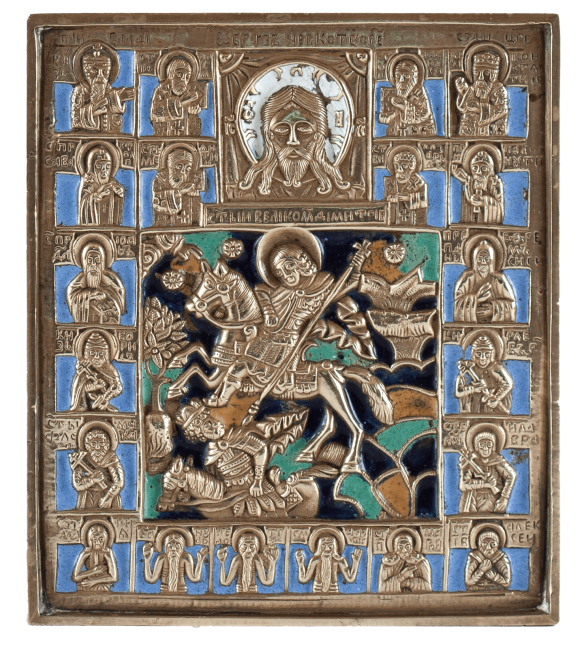 A beautifully enameled cast metal icon of St Demetrius of Thessaloniki, depicting the warrior saint sitting on horseback conquering the evil king Kolojan. The central image is enclosed by portraits of several saints and the Holy Vernicle.

This carefully sand-casted and enameled icon is very well preserved. The fine details of the faces and the engraved texts show hardly any traces of wear as a result of devotion-related touch, while the enamel, which is applied in five separate colors, does not show any significant traces of use.
The high quality of the casting and the careful way in which the enamel is applied according to a predetermined pattern are exemplary of the extraordinarily high standard of the Old Believer workshops that supplied well-to-do Russians with icons that both met a religious and aesthetic need. It is precisely these characteristics that make icons such as this one of warrior saint Demetrius beloved collector’s items today.
According to legend, St Demetrius performed numerous wonder works during his life in the second half of the 3rd century but also in de centuries after his death and canonization. The scene in which Demetrius is depicted on this icon celebrates the miraculous deliverance of the Greek city of Salonica in 1207. At that time, the city currently known as Thessaloniki in the centre of the geographic region of Macedonia was besieged by Bulgarian troops of Khan Kolojan. At the prayer of the Christians who had gathered desperately behind the city walls, the saint appeared on his horse and killed the commander of the enemy by piercing him with his lance. In the upper left corner of this central scene, the hand of God appears from the clouds to remind believers that Demetrius did not perform this miracle on his own, but that he was allowed to do so as an instrument of the Almighty.