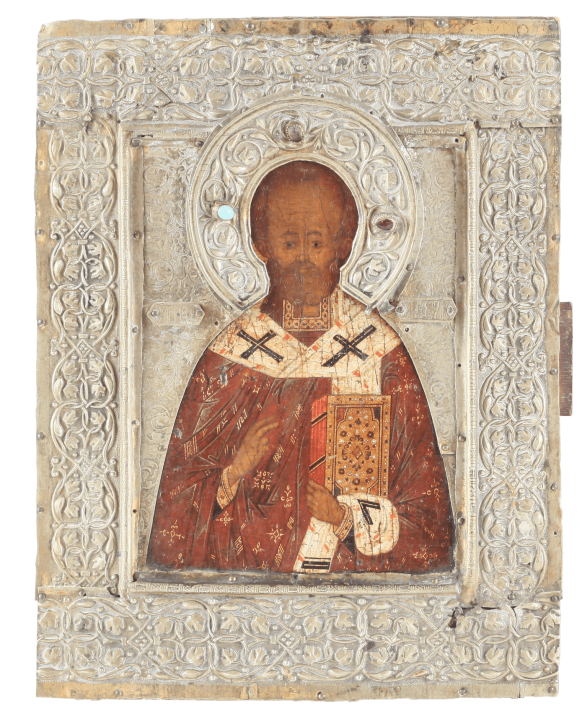 A late 16th century icon of Saint Nicholas the Holy Bishop of Myra and Wonderworker with a silver oklad.

St Nicholas is the most widely revered saint in Orthodoxy. In Russian cult, his popularity began well before the 10th century and eventually led to a position where, from the perspective of Russian Orthodox believers, only the Mother of God is considered closer to God Himself. It is therefore not entirely surprising that the Russians had a saying “If anything happens to God, we have always got St Nicholas” and that in every house of an Orthodox believer, from farm to castle, from simple chapel to cathedral and from cell to monastery, an icon of Nicholas could be found.
Although there are doubts about the historicity of Saint Nicholas, the Orthodox tradition places him in the 4th century. According to legend, he participated in the Council of Nicaea, wher he had a heated discussion with Arius of Alexandria about the dogma of the Trinity, which ended in a scuffle.
On this icon, dating from the end of the 16th century, Nicholas is depicted as a bishop, wearing a stole decorated with crosses. He holds a gospel in his left hand and blesses the onlooker with his right hand. His characteristic high-doomed, deeply wrinkled forehead reveals his great wisdom, while his expression conveys modesty, mildness and deep faith.
The background and border of the icon are covered with the original silver metal oklad nailed to the panel.